Is the Old Governor's Mansion in Milledgeville Haunted by Old Molly?

Often called the First Lady of Milledgeville, or the Gem of Milledgeville, the Old Governor's Mansion is the centerpiece of the historic district in Millledgeville and one of the highlights of the Georgia College & State University Campus. Designed by noted architect Charles Cluskey, an Irish immigrant, and built by Connecticut builder Timothy Porter, the mansion was finished in about 1839 (Georgia College & State University, 2021). While Milledgeville was founded in 1803 and named for Georgia Governor John Milledge, the state legislature did not designate the city the permanent capital of Georgia until 1805, and the state legislature opened its first official meeting in the city in the newly constructed statehouse in 1807. The Old Capital Building is now the main administrative building and a classroom facility at Georgia Military College's main site in Milledgeville. The Old Governor's Mansion did not begin housing governors until 1839, well after the seat of power was moved there 32 years prior. The first governor to occupy the mansion was Governor George Rockingham Gilmer, who moved in in 1839 during the end of his term (Turner, 2013). Other governors who lived there were Charles McDonald, George Crawford, George Towns, Howell Cobb, Herschel Johnson, Joseph Brown, Provisional Governor James Johnson, Charles Jenkins, and Provisional Governor General Thomas Ruger (Turner, 2013). Howell Cobb also served as Speaker of the U.S. House of Representatives and President Buchannan's Secretary of the Treasury, and Herschel Johnson was Stephen Douglas' running mate in 1860 against eventual winner Abraham Lincoln. Governor Ruger was appointed as military governor during Reconstruction (Turner, 2013).

While the mansion was the center of power for a few chaotic periods of Georgia history, perhaps the most memorable of those epochs was the arrival of Union General William Tecumseh Sherman as he entered the city of Milledgeville during his famous March to the Sea in November 1864. While in Milledgeville, Sherman stayed at the mansion. Other events that occurred in the state while the mansion served as the home of the chief executives were the Cherokee Removal and Trail of Tears and the Civil War itself.

One can imagine that a home to so many influential politicians and so many chaotic and perilous events discussed, managed, and even played out in or near the mansion, that there would be stories of the supernatural and strange. I have gone on many tours of the mansion in the last 15 years, one of them recently as part of their Death: After Dark Tour Series where I learned about the way our ancestors in the 19th century dealt with death. Of particular interest was the death of the brother of Governor Joseph Emerson Brown-Joseph Mackey Brown. He died as the result of a wound while serving as an officer in the Confederate service. Joseph M. Brown died in the mansion in July of 1864. In fact, the mansion used to do a murder mystery tour where guests try to solve the murder of Mr. Brown, albeit he was not murdered and was killed as a result of military action, a fact the mansion staff makes very clear (Pound, 2017).

Along those lines, during the Death: After Dark Tour I attended was about over, one patron asked the tour guide, who was quite the storyteller and very familiar with the history of the mansion, if there were any ghost stories or episodes of the paranormal that she could relate. She stated very clearly that the mansion was not haunted, and that the staff knew of no ghost stories she could recall. However, some have had quite a different experience in the mansion through the years. The man responsible for establishing the mansion as a historical "must visit" was James Turner, who was the Mansion Director and Adjunct Professor of History at GCSU. Sadly, he passed away in 2017, and in his stead, the mansion was left in the care of Matthew Davis, his protégé. Matthew has turned the mansion into an even greater historical asset to Georgia, and has even managed to get the mansion affiliated with the Smithsonian Institution. During Turner and Davis' tenures at the mansion, thousands of visitors and researchers have visited the mansion, not to mention the many students, employees, docents, and graduate assistants.

Although I have never sat down and discussed this with Matthew or asked him if he has found anyone by the name of Molly in the historical record at the mansion, stories do abound about a cook who served in the mansion. Apparently Molly was well-known for a few of her specialties, which included black-eyed peas with pork and blueberry muffins. Some visitors and workers at the mansion have reported smelling those things inside the mansion itself, although there is no place in the mansion where those items could be cooked. While the mansion includes the restored kitchen where food was prepared in days of old, the wood-fired stoves and fireplaces are no longer operated and there would be no one cooking those items inside the mansion. While no one is sure of who "Molly" is, nor when she lived in the mansion or if she is even real, it should be noted that there is a cafeteria nearby the mansion across the street at the Maxwell Student Union. Food is served there to students at GCSU. It should also be noted that there are bakeries in downtown Milledgeville, most notably Ryals Bakery, that could be the source of the smell of the blueberry muffins. However, the timeframe of when these stories were told and originated is not known.

Besides the smells associated with "Molly," the cooking ghost, stories are told of bed-linens being tossed from their beds, and the scent of cigars. It should be noted that there is no smoking allowed inside the mansion, and the policy is strictly enforced. Another story involves the local fire department. Once, the staff of the mansion smelled burned potatoes. The smell became so strong that it alarmed everyone, and for safety sake, the fire department was called. Upon arrival and investigation, the source of the smell was never found (Hargrett, 2014).

So is the mansion haunted? Or are these stories just the flights of fancy of ghost hunters or the over-active imagination of staff and visitors who are projecting their fears and suspicion and making more of the issues than there really is? Could the smells have originated outside the mansion? Was there ever a cook there named "Molly?" If so, is it possible that she is still hanging around the mansion and its grounds cooking up the victuals for which she was so well-known? I have no clue, but what I do know is that a visit to the mansion is never disappointing, and stepping into the building is like stepping back into the 1850s. 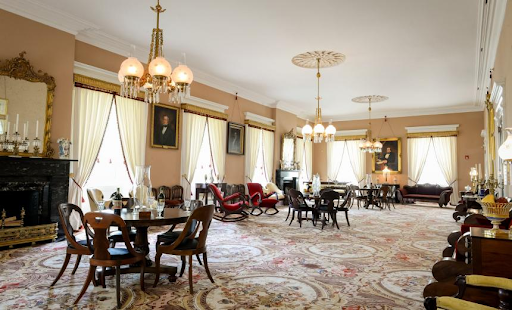 Photo courtesy of gcsu.edu and the OGM page.

Pound, G. (October 13, 2017). "First-Ever Murder Mystery at Old Governor's Mansion Sells Out in an Hour," The Union-Recorder. Retrived from: https://www.unionrecorder.com/news/first-ever-murder-mystery-at-old-governor-s-mansion-sells-out-in-an-hour/article_4c5ad78a-afc7-11e7-8cc9-bb4d2fd8c7a7.html.

Posted by The Professor at 7:54 PM