Conundrums Webcast About Bigfoot in Georgia 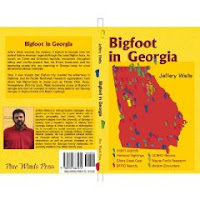 The interview I did with Jay Michael on Conundrums is now available on their site. Please visit
http://conundrumstv.blogspot.com/

I hope you enjoy. The interview was about Bigfoot in Georgia, my book.
Posted by The Professor at 12:28 PM 2 comments:

Recently, I received a comment on the blogsite from a young man who is a student near Brunswick. Apparently, he was visiting Fort King Georgia near Darien a few Sundays ago, and he caught the footage seen on this video he loaded on to YouTube. After a few messages back and forth, he was able to describe the events of the day.

Bored out of his wits, he decided to visit the fort and go on the nature trail. As he came to the boat launch, he noticed an animal flapping around in the water. He took a few pictures with his Droid phone, but decided to try and capture video of it as well. The YouTube video was taken with his phone. He told me in his email that he wished it had been able to zoom closer, but this was as close as he was able to get with the phone camera.

He showed the video he captured to a woman who was working at the time at the facility. She told him that it was more than likely not a manatee because she had never seen one at that location. (I admit that this does not entirely rule out the possibility that it was a manatee.) He noticed a flyer about the local legend of "Alti", which is sometimes called Altamaha-ha, and he began to do some checking. He found some footage of a similar sighting in Florida. He also has been looking in to the behavior of manatees, and from what he has learned, the activity he saw from the aquatic animal he witnessed that day does not match what he has learned is the normal behavior of the manatee.

So what do you think? Is there really a type of Loch Ness Monster swimming around the coastal waterways of Georgia?
Posted by The Professor at 2:08 PM 4 comments: