Happy Halloween to all of my readers. I have many more blog articles coming up in the next few days. I realize I have been kind of slack on posting these last few months, but with a new home and a few new responsibilities, it has been busy. But things are slowing down now, and I am looking forward to more posts. I just put up a few ghost legends today in honor of Halloween. Happy reading!!!
Posted by The Professor at 3:32 PM 1 comment:

Ghosts of The Andersonville Raiders

Andersonville was the site of one of the biggest tragedies during the War Between the States. Although there were Union prisons with as gruesome carnage as what was seen at Andersonville, this prison is often remembered for its emaciated bodies, starving Union soldiers who suffered because there was a lack of food, and the awful stench of death associated with the place. However, there is another story about Andersonville that has endured in Georgia myth and legend.

Apparently, there was a group of Union prisoners called the Andersonville Raiders. This group stole, and in some cases, did physical harm to many of their fellow Union prisoners while in the camp-all in an effort to survive. Their bullying and pillaging became so intense, that when they were caught and brought to trial, it was their fellow prisoners who tried them and then sentenced them to hang, right there in the prison yard. Personnel and vistors to the site say that the apparitions of Union soldiers can still be seen here on these grounds. The phrases "Had to rob them," and "Couldn't have survived otherwise" can be heard floating through the air.

The legend is best described by the famous folklorist, the former Nancy Roberts in her book Civil War Ghosts and Legends. I highly recommend this book if you are interested in folklore and legend, particulary in the area of the War Between the States. Roberts, who died a few years ago, did a marvelous job of retelling the famous legend of the Ghosts of the Andersonville Raiders.
Posted by The Professor at 3:18 PM 1 comment:

A Haunted School in Chickamauga, Georgia

One of the better books I have read recently was by Leslie Rule, the daughter of famed writer, Ann Rule. It is called Coast to Coast Ghosts. In the book, there are a multitude of stories from all around the U.S.A. One particular ghost story was from Georgia, and it was actually about a haunted school.
According to residents of the town and teachers at Gordon-Lee Memorial High School, there are a lot of strange things that happen there. Some report hearing voices and laughter echo through the halls when noone is in the school. The school was built in 1932, and the main building was originally a boarding school. The town itself is the site of the famous Civil War Battle of Chickamauga. It is reported that over 25,000 people died in two days during the battle. Chickamauga, the town, was used as a headquarters for the Union Army. Nearby the town, and school, a sharpshooter, atop his horse, combed the countryside shooting at the Union troops and spying. He was killed in the midst of his spying, but legend has it that night hikers in the woods were the sniper/spy was said to have ridden his horse can still see a pair of glowing eyes. They have given the spectre a name-Phantom Green Eyes.

It appears that this little town, way up at the northern border of the state, has its fair share of legends!!!
Posted by The Professor at 1:15 PM 2 comments:

Evil Presence at the Eagle Tavern in Watkinsville 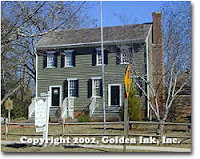 Watkinsville, Georgia is in Oconee County-the county just south of Athens-Clarke County, which as most Georgians know, is the home of the University of Georgia. As a UGA student, I traveled through Watkinsville a lot of Fridays headed home and on a lot of Sundays headed back. The Tavern is a landmark in the city, and it is a reminder of a bygone era in Georgia's frontier history.

The Tavern is owned by Oconnee County and the State of Georgia today, and it serves as a welcome center and local tourist destination. It has a very long history. Built in the early 1800s, the site was said to have once been part of Fort Edwards. The fort stood in this area where Creek and Cherokee Indian territory once intersected, and the fort was placed there by the state of Georgia as a way to protect against the frequent attacks by natives in the area whose hostilities, while directed at each other, were often directed at white settlers to the area. After 1820, the building became a stagecoach stop for coaches traveling back and forth between Athens and Milledgeville. The building housed not only a tavern, but also an inn, which I am sure was a welcome sight to weary stagecoach travelers in the early days of the 19th century.

The Eagle Tavern has not only been the site of rest for travelers and a place to find drink for the revelers, but it apparently is also a place where something evil still resides. According to Corinne Underwood in her book Haunted History: Atlanta and North Georgia, the Eagle Tavern has had its share of specters and weird happenings. One employee at the welcome center described the sight of a dancing lady. The apparition appeared to her out of nowhere and was wearing a pink dress. On other occassions, employees have heard the sound of loud/heavy footsteps in the facility when noone else was present, as well as the smell of cherry tobacco while noone was present who smoked in a facility that was non-smoking. Additionally, a group gathered outside witnessed what looked like a finger and hand in the upstairs window, but upon examination, noone was there (Underwood 27-30).

These instances have not caused a great deal of alarm at the Eagle Tavern; however, one startling event did. According to mediums who have visited the Tavern, there appears to be an evil presence in the basement. Paranormal experts refer to this entity as non-human or elemental. An employee had such negative experiences in the basement that she fears returning there. First, after coming in to contact with the presence, her eye became irritated, then infected. A sensitive told the employees at the Eagle Tavern that they should not go in to the basement because the entity could do physical harm. This was proven so true when members of the East Georgia Paranormal Society visited the Tavern and did an investigation. One member was physically attacked. The entity bit his hand and broke bones in it. Investigators said that you could hear the bones crushing on camera. During another investigation, a different research group picked up an EVP in the basement saying, "I wish you would die." Yet a third group investigated the Tavern basement when one of the researchers felt a pressure on his lower back as if he were wearing a heavy backpack. The video showed that there was a black figure standing over the man with what appeared to be elbows pressing down on the man's shoulders (Underwood 31-33).

Is there an evil presence in the basement of the Eagle Tavern in Watkinsville, and if so, what is it? Why has it decided to physically harm visitors to the basement? Could it be possible that this is an evil entity spawned by a tragic event in the tavern's past? The historic landmark has been a common sight to college students for ages. I wonder how many of them have taken the time to visit and find out what lurks inside. I know I didn't!!
Posted by The Professor at 3:48 PM 2 comments: