Who Bombed the Georgia Guidestones and Why?

Back in 2008, almost 14 years ago, I blogged about one of the most notable mysteries in Georgia history, namely who was behind the construction and planning for the Georgia Guidestones and why? You can see that post here for all the backstory on them.
https://georgiamysteries.blogspot.com/2008/11/georgia-guidestones.html

I had never gotten the chance to visit the Guidestones; in fact, I have never even been to the city of Elberton, Georgia close to where they were located. It is a shame that I was not able to visit, as they are no more. On July 6, 2022, someone planted a bomb at the site of the Guidestones and partially destroyed them. Because the damage, which did not knock down all of the monument, was considered to be crippling, the remaining parts of the monument were demolished by local authorities. As much as it pains me to say this, I feel that this was the right call. The remaining part of the monument was not the same without the part which was destroyed. It was a danger, and visitors would not only have been in harms way near the monument as it was left after the explosion, but the entire story would have been about the bombing at that point and not the message the monument conveyed before that.

So this begs a few questions. First, who did this? Right now, the Georgia Bureau of Investigations is in charge of the search for the perpetrator(s). There are a lot of unanswered questions about who did this. Currently, all that is known is that sometime in the pre-dawn hours on Wednesday, July 6th, an explosive device detonated and took out one of the four granite panels, essentially turning it into rubble. Video does exist of the explosion and can be seen at the CBS News link below. The video shows someone at the monument and then quickly running away right before the explosion around 4:00 AM that morning. There is also video of a silver sedan leaving the scene quickly afterwards. What many people did not know is that the monument has video surveillance filming around the clock. While the figure caught on camera is unrecognizable, the GBI says that they are working to enhance the image and using it to help jumpstart the investigation. At this time, the GBI and local police have not released any descriptions of the suspect or suspects. They do not know how many perpetrators may have been involved. The good news is the GBI has said it has many leads, so agents will be busy in the coming days investigating and following up on those leads.
https://www.cbsnews.com/news/georgia-guidestones-blown-up-explosion/

The second question involves asking why. Why did someone want to see this monument destroyed? Was it offensive to a large number of people? Did the stones contain cryptic messages that would upend humanity and the current world order? Well, those are more difficult questions to answer, for if they apprehend a suspect, more than likely, the suspect(s) won't talk much, as most of them never do. They just deny involvement despite mounting evidence to the contrary. For the most part, the monument was a HUGE tourist attraction and somewhat of a boom for Elberton and Elbert County. People from all over would travel to the area to visit the Guidestones, and while they were there, they would eat, tour, buy gas, and sometimes stay over in local hotels. This is no more unless the Guidestones will be rebuilt, and given the fact that the original financier/mastermind behind the original erection of the monument is unknown but to a few, and the fact that he may be a person who has already passed on, the likelihood of another build is somewhat in doubt. However, some local groups have talked about spearheading a fundraising effort to replace them. If so, I am sure they will try to replicate what was already there. The stones contained messaging that some took offense to for various reasons. The first message-" Maintain humanity under 500,000,000 in perpetual balance with nature"-seemed to alarm some, especially given that there are over eight billion humans on Earth as of 2022. This would mean that we are about 7.5 billion out of balance.  Others may have been afraid of the messages about uniting humanity with one language and possibly the one about nations settling external disputes with a world court. Some felt the Guidestones called for a "New World Order" and a "One World Government." The message about maintaining humanity under half a billion people was somewhat frightening to many in light of the Covid-19 pandemic with groups thinking that the mastermind behind the Guidestones could somehow be involved an international cabal that was promoting the spread of Covid-19 to wipe out large numbers of humans to align with the half a billion message. Who knows?

Whoever is to blame for the explosion and eventual demolition of the Georgia Guidestones has reasons for his or her actions, I am sure. However, it is truly an example of someone or some group taking violent action to stamp out a message with which they did not agree. I cannot think of anything less American than that. Were the Guidestones strange and mysterious? Yes. Was the shroud of mystery that surrounded the origins of the monument such that inspired conspiracy theories? Yes. Nonetheless, the monument presented no threat to anyone as it stood. If anything, the messages were thought-provoking and inspired debate and discussion about how or if they could be accomplished. Discussion and debate are never bad things, but silencing the things that inspire debate and discussion usually is. As Chris Kubas, the Executive Vice President of the Elbert Granite Association told CBS News, "If you didn't like it, you didn't have to come see it and read it." 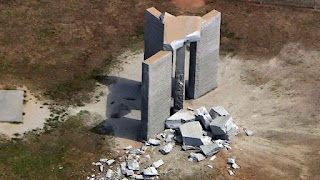 Posted by The Professor at 6:17 PM No comments: