Eerie Georgia: Chilling Tales from the Mountains to the Sea by Jim Miles, A Good Read!

Jim Miles has staked out a position in the Georgia paranormal literary world as "Mr. Weird Georgia," mostly owing the moniker to his many books on ghosts and the supernatural in Georgia. Some of his most popular books are Weird Georgia: Close Encounters, Strange Creatures, and Unexplained Phenomena, Civil War Ghosts of Atlanta, and Haunted North Georgia. He has also released a number of books on the Civil War in Georgia. Recently, I ran across one of his more recent books from the last few years, and I am glad I did. Eerie Georgia: Chilling Tales from the Mountains to the Sea is a great read. It is jam packed with vignettes about the strange, supernatural, weird, and unexplained in the Peach State. Written in narrative style, Miles provides access to some of the weirdest, yet interesting events in Georgia. Some of the more common stories can be found in the book, including sightings of Altamaha-ha, otherwise known as Georgia's Loch Ness monster, and the ghosts of the Windsor Hotel in Americus, but Miles also presents a bevy of other tales that even the most avid reader of strange and macabre tales from Peach State, like me, might never have heard. I have taken the liberty of listing a few of those below, as well as a brief description of the tale. These were some of the more interesting to me.

1. Connie's Sage-This story details memories related to the author by a lady who claimed to have alien encounters throughout her life, and vivid details about at least three encounters, one of which was in her youth, and another that included her husband. The story was definitely weird and has the potential to cause chill bumps, particularly with the extreme circumstances behind the encounters and contact with the beings she described.

2. Ancient Roman Coin-This narrative particularly interested me as an historian and professor of history. The story relates details about a woman who once lived in a small community outside Savannah and her issues with the septic lines outside her home. When a professional came and dug into the yard in an attempt to fix the problem an ancient Roman coin was unearthed. The discovery brought up great points about the historical narrative and assumption that Christopher Columbus and his crews were the first Europeans to successfully explore and infiltrate the interior of North America. Of course, the voyages of Leif Erickson are also relevant to this discussion, but even so, the Roman coin would predate the Leif Erickson voyage by a millennium or more. This story is definitely one that most Georgians know nothing about and has the potential to cause a divergence from the accepted narrative about the Age of Exploration and Discovery.

3. Mad Gassers-Similar to stories from the Midwest and other parts of the country, Columbus and Bainbridge seemed to have an issue with what the writer calls a Mad Gasser. In one account, a family dog was able to wake up the rest of the family before too much damage was done, people were harmed, or property stolen. The gasser escaped, but his fumes, piped into the home via windows, did have an impact on the residents and made some of them ill. In yet another account from Bainbridge, the gasser attacked several times and several families in a neighborhood in the mid-1940s, just as World War II was coming to a close. Filling the homes with a sweet smelling gas that made residents ill, one family was so frightened they left their home and had to stay with neighbors. As is to be expected, no one was ever charged with the crimes, so the Mad Gassers were at large for quite a while. With the large chunk of time that has passed, it would be quite logical to assume they are now dead, that is if death came naturally to whatever or whomever this fiend was.

The book describes a great deal of phenomena in Georgia. From the Mud Volcano at the Temple of Nodoroc to the stories about falling fish from the sky, Eerie Georgia will not disappoint. 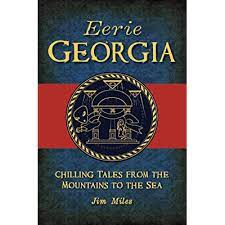