Altamaha River Area Seems to Be a Hotspot for Bigfoot Sightings 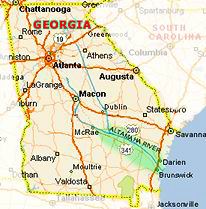 The Altamaha River area of Georgia tends to be a very active area in terms of Bigfoot sightings.  Recently, I have had several emails and found several reports of sightings and activity in the area.  One reader on Facebook sent me a message that contained stories about two sightings in the McIntosh County area.  The first was a story told to the reader by a friend of his who was with his father in McIntosh County in a swampy area.  They were both on foot walking a railroad track deep in the woods. According to the story, the area where the tracks were had been cleared out about 20 feet. In the distance, the man and his father could see what they thought was a man walking across the tracks.  Not being a Bigfoot believer, the man said he was a bit perplexed by what he saw. He said that it may not have been a man afterall, as what he saw was over six feet tall, had lots of hair all over its body, and had arms that were long and hung down its side for quite some length.  In another story told to me by this same reader, he and a friend of his were on the Altamaha River for a hunting and camping trip.  It was the summer of 2005, and he and his friend decided to go for a late night boat ride. Finding a creek running off the river that they had never seen, the two decided to explore the area to see if there was any game there that they might come back later and hunt.  They boated about a mile up the creek when they decided to stop the motor and listen.  On the banks of the creek could be heard loud growling sounds and what sounded like the crashing of tree limbs and the breaking of tree branches in the woods.  The animal seemed to get more and more irritated as the pair remained on the creek, and as this happened, it became louder and seemed more aggressive in terms of breaking things in the woods.  Deciding that it was time to go, the two cranked up the boat and left the area before they saw whatever was making these awful growls and tearing up the woods face to face.
At the BFRO website there are a number of reports from this area of Georgia.  In one, posted in November 2008, a man was hunting with his uncle on the Altamaha River.  As he sat on the bank of the river, he looked to his side and noticed what he thought was a huge man standing near a tree.  He described the "thing" as being very tall, built like a football player, and hairy.  In fact, he said the thing was covered with hair about a foot long. It had a greyish cheek and a pointed nose with beedie eyes.  He looked away and then back again, and whatever this was had left.  After hearing some splashing in the water, he realized that whatever he had seen was now in the river. He walked closer, which elicited a 15-20 second growl from the animal.  The witness said that when the animal growled, all the squirrels in the vacinity ran toward him.
There have been other sightings reported along the Altamaha River basin. It is a very large area, and the river itself is ripe for such events.  But I can't help but think that there is quite a bit of activity, or sightings at least, in that area.  Perhaps someone has heard of these types of encounters in that area. As a matter of fact, the witness in the BFRO story above says that there is a Wayne County legend called "Feets." It would be interesting to hear more about this.  I grew up and lived for quite some time in Montgomery County. The Altamaha River is formed at the south end of that county near Uvalda.  It is an impressive sight. I had never heard stories like this while I was growing up there. I still have lots of family there now.  I return to the area on holidays and family visits. Perhaps I ought to try to find out if there have been newspaper stories in my hometown paper that contain reports and sightings of weird animals on the banks of the Altamaha.
Posted by The Professor at 11:31 PM

The typical response in Mcintosh is o these things do not exist so when something strange happens to them in the area they play it off as something else. When someone sights one or is scared out of their wits they become believers and find out other people have had similar experiences thankyou for writing about the area I hope someone does some research soon.

Have you heard any stories about a "bigfoot" in the area of Wilcox and Ben Hill Counties? I know a woman who saw one that they called The White Man. Huge, covered in long white hair. She was very close to it, maybe ten feet away, and it showed her its teeth. She didn't get the idea that it was smiling. This was in the early 70's. Huge "beds" were found in the pasture behind her house and the woods in front of her house. The children in that area were well familiar with it and saw it often when out riding horses. One was seen on the bank of the Ocmulgee River, and this same dear lady and her husband heard screams and saw small trees shaking as if something were trying to rip them out of the ground. This also happened on the Ocmulgee. I do know that people have been frightened off of that river never to return. They would not discuss it.