What Happened to Christopher Thompkins? 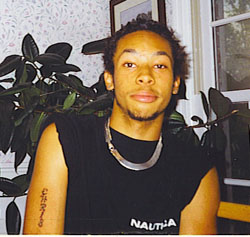 Missing persons and abduction cases are quite perplexing, and they often confound authorities, terrorize families, and mystify sleuths. In Georgia, one of the strangest missing persons cases is that of Christopher Thompkins.  Chris disappeared from Ellerslie, Georgia-a small community in Harris County not far from Columbus on Hwy 27. Thompkins, who had gotten a job with a surveying company owned by a friend of his mother Ann, was working on Hwy 85 with a four man crew on Friday, January 25, 2002. The site on Hwy 85 where his crew was working was a wooded area. He left home that morning around 8:10 AM and rode to the site with the owner of the survey business. The morning went along without incident, and the four man team broke for lunch. After lunch, around 1:30, the four workers were walking along Hwy 85 near County Line Road and Warm Springs Road. The men were about fifty feet apart, and Chris was at the rear of the group close to the road. According to the men who were on the crew with Chris, this was the last time they saw him and in the last location. The next thing they knew, he was gone.

According to the Georgia Bureau of Investigation, Chris was wearing a pair of navy blue pants, a plaid jacket with a hood, and a black skull cap. On his right arm there appears a tattoo of an ice cream cone with his name written vertically inside the cone. The top of the cone where the ice cream scoop would normally be is not an ice cream scoop but rather the head of a joker wearing a hat.

The spot where Chris was last seen was wooded, but there was a barbed wire fence between the road and private property that bordered the road itself. According to David Paulides (2011) in his book, Missing 411: Eastern United States, Chris' coworkers returned to the area to search and there they found one of the boots he had been wearing when he disappeared. It was lying next to the fence that bordered the road and the private property nearby, and strangely enough, there were coins lying near the boot. Also scattered about on the grass nearby were the tools that Chris had been using when he was last seen. The man who owned the business called Chris' mother, Ann, not long afterwards, and around 4:15 PM, they reported Chris' disappearance to the local sheriff's office; however, as is customary, local authorities do not classify a person as missing until s/he has been gone for over 24 hours. Once this time had passed, the local sheriff's department started conducting an official investigation where they found part of the cloth from Chris' blue pants on the barbed wire fence near the area where his coworkers had found his boot. In July, nearly five months after he disappeared, someone said to be the owner of the property on the other side of the barbed wire fence, found the other boot that Chris was wearing the day he disappeared. Interestingly enough, the owner of the survey company for whom Chris worked mentioned that he had been acting odd in the days leading up to the disappearance. On the other hand, Chris' mother said she has no recollection of him acting any differently or strange, and in fact, she mentioned that he was acting quite normal.

This disappearance has some baffling elements. Beyond the big question of what happened to Christopher Thompkins, there are a few things that should be asked.
1. Why were Chris' shoes removed from his feet?
2. If Chris had been determined to run away and disappear, why did he remove one shoe at the fence and one in the field a short ways off? In fact, why did he remove his shoes anyway if he fled on foot or even in a car?
3. Why were coins and tools that had been in his pockets or in his person found in the grass and near the area where he was last seen? If he decided to empty his pockets, why did he dispense with the coins? One would think he would keep money he had on him if he were going to disappear on his own, and one would definitely think if he were being robbed or abducted, the captor robber/captor would keep what money s/he found on Chris.
4. Since items that were in his pockets and on his person were found scattered at the scene of his disappearance, if someone had rifled through his pockets during an abduction, how could his coworkers, who were only about fifty feet away by their own admission not hear that, or more so, if someone snatched him where he stood and then riffled through his pockets, why was the scuffle and ordeal not heard by those coworkers? If someone took the time to accost Chris and then rifle through his pockets, wouldn't they have risked being seen by those coworkers or even someone passing by in a car? It is strange that someone would take that kind of risk. So if he were accosted and abducted on site and the abductors did not rifle through his pockets, why were his belongings on the ground nearby? Did he throw them down? If so, why?
5. Was Chris attacked by an animal? If so, why was there no blood found at the scene commensurate with what we know accompanies an animal attack? Also, why would his coworkers not have heard any screams or cries for help in the midst of an animal attack?

This case is quite strange! It was as if Chris Thompkins was snatched up without anyone noticing or hearing a thing. I say that it was as if he were snatched up because of the way part of the fabric from his pants was found in the barbed wire fence, as well as the fact that one of his shoes was found at the scene of the disappearance. When one takes in to consideration that his coworkers heard nor saw anything, it makes the disappearance even more mystifying. One of the saddest elements of this story is that his mother has been left with no answers whatsoever. A murder at least has some sense of closure in that the families know that their loved one is gone and cannot come back. A disappearance such as Chris Thompkins brings no sense of closure. His mother and loved ones are left to wonder where he is, if he is ever coming back or can, and what happened on that roadside that January day. Perhaps one day soon, we will have answers to these questions, and Chris' mother can have some sense of closure.