Did You Know There Was A Volcano In Georgia? What About the Wog?

Did you know that there was a volcano in Georgia? Me neither, at least until I was doing some reading on the history of Winder, Georgia. In my research on Georgia political history, I have done a lot of reading about the late U.S. Senator Richard B. Russell, Jr. He was from Winder. As I wandered across a book or two on Barrow County and Winder history, I found an interesting snippet of information about a place not far from Winder and the home of Senator Russell, that is oftentimes called Georgia's Volcano.

This is not a volcano in the pure sense, the but area, according to author G.J.N. Wilson, did not support vegetation, and the trees growing nearby were very small compared to those growing normally in other areas. The area was a few acres in size, and it was full of bubbling, bluish mud like sludge. The mud moved in some places, giving the impression that it was boiling. In fact, in the center, it had the appearance of boiling water.

The Creek Indians called this area Nodoroc, somewhat akin to hell. They considered the area to be a place of great evil. In fact, it was said that living near the area was a monster called the WOG. It is the WOG that I find most interesting. They said that this was an animal with long jet black hair, the size of a horse, front legs larger than its hind legs, and had a small white sliver of white hair at the tip of its tail that if fanned up and down. The other spooky feature about this legendary animal was that it had a long forked tongue. According to Alan Brown in Haunted Georgia, the settlers in the area many years ago used to report that they could see the long forked tongue sticking in through the chinks in their log cabins. The Creek Indians said that teh WOG was the devil, and that he lived in Nodoroc.

The WOG was said to have only eaten carrion but would attack if threatened. Other stories told about this legend state that the WOG would roam the area looking for small animals, some being dogs and cats, to devour.

This legend is very strange. It is part of Creek Indian legend in Georgia. In one legend, a Creek chief, Umausauga, had a daughter that was being pursued by a Choctaw warrior. Not wanting anything to do with him, she rejected his advances. He killed her. When her father found out, he sent a party of Creek warriors to find the killer. They found him, cut out his heart and fed it to wolves, and threw the body in to Nodoroc to be eaten by the WOG.

This is one of the coolest Georgia legends I have ever read about. I think it is more than neat that there is a huge area near Winder that used to be home to some sort of boiling mud-like substance that settlers called a volcano. The WOG, whatever it was, has to be one of the most intriguing legends. Has anyone else heard about this?
You can reference stories in Dr. Alan Brown's Haunted Georgia, Jim Mile's Weird Georgia, and Frank and Victoria Logue's Touring the Backroads of North and South Georgia. In addition, the legend is mentioned in GJN Wilson's Early History of Jackson County, Georgia.
Posted by The Professor at 3:56 PM 9 comments:

Dinner With the Author in Downtown McDonough 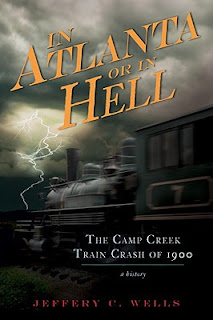 On Saturday, June 19th at The Season's Bistro in downtown McDonough, I will be discussing my book In Atlanta or in Hell: The Camp Creek Train Crash of 1900 as part of a dinner with the author event. The event will include dinner, an after dinner discussion of the book, possibly a train crash tour of downtown McDonough, and book signing. The books are available at Bell, Book and Candle on John Frank Ward Boulevard downtown.

I appreciate Lynn and Caprice for helping set this up. It should be a lot of fun. Contact Lynn at The Seasons Bistro about the dinner, and Caprice or Shannon at Bell, Book and Candle about the book.

I will be the guest on Jay Michael's weekly online video show called Conundrums. The show will be broadcast at the following website on Monday, June 24th.
http://conundrumstv.blogspot.com

We will be discussing my book Bigfoot in Georgia, as well as this website Georgia Mysteries. Tune in and watch me as I talk about the legend of the Georgia Bigfoot.
Posted by The Professor at 2:20 PM No comments:

Bigfoot Obviously Angry at A Couple in Emanuel County

I am from this area, albeit about 45 minutes west of Emanuel County, but my mother lives less than ten minutes from the area in this report now. My friend Matt Pruitt investigated this report and posted it. I talked with him about it shortly afterwards. He commented that it was one of the more interesting reports from the state.

The incident took place near the Ohoopee River, a place where prints and other things have have been seen, indicating that there might be some activity along this waterway. This particular encounter took place in November 1982 when a couple purchased some property in the area that had once been a fishing camp. On the property was a small mobile home measuring 12x45 feet. On this occasion, the weather was a bit cold, with the person reporting the encounter mentioning that it was in the 20s. Being that it was getting close to winter, I can imagine that the air was crisp and cool.

The area where this took place was heavily wooded, and, as I mentioned before, the Ohoopee River is nearby. On this evening, the wife was in the kitchen, while the husband was in the living room of the mobile home reading. The couple had purchased the property and were staying in the mobile home temporarily until they could build their house on the land. Obviously, this ticked off someone, or someTHING. On that night, as both were quietly passing the evening, a loud howl erupted from the night and something violently shook the mobile home, almost tipping it off the blocks and supports upon which it was sitting. The howling and shaking lasted about ten seconds, an eternity when something like this happens. The man grabbed his firearm and quickly went outside to investigate. Nothing was there-anywhere.

As Matt Pruitt of the BFRO researched the report, he discovered that the man had lived there for a while after the incident. It was also mentioned in the report that the man reporting the incident had never even imagined that it COULD have been a Bigfoot encounter until he came upon the BFRO website and heard the Ohio Howl from 1994 recording posted on the site. He said it matched what he heard almost perfectly. Pruitt felt that what happened was the couple had "intruded" upon what was probably Sasquatch hunting ground, and that it might be possible that the animal was using the mobile home as a shelter. Afterall, the man reporting the encounter mentioned that the home had been abandoned for a little while before he and his wife came there, and that when they moved in, there was evidence that animals had entered the home. Pruitt feels most certain that this Sasquatch had been using it as a shelter, and the couple disrupted that.

This is a strange one to me. What makes it even scarier is the fact that my mother and stepfather live nearby, and my stepfather, who I had no clue believed in Bigfoot until my book came out, says that he hunts in the area a good bit. In fact, he and my mom own more than a few acres of wooded land in the area. They have dogs, and there is a pond not far from the back porch of their house on the property. If something like this was living nearby as recently as the mid 1980s, I am honest in saying I am a little nervous for them, and a little nervous for myself too. For I visit their home at Thanksgiving and Christmas each year. HMMMMM............
Posted by The Professor at 7:31 AM 2 comments:

I will be joining two other local authors in a book signing at the Geranium Festival in McDonough on Saturday, May 15th. Bell, Book and Candle will be hosting a few local authors, and I am included. I will be signing copies of my book Bigfoot in Georgia, as well as copies of In Atlanta or in Hell: The Camp Creek Train Crash of 1900, and Moments in McDonough History. The signing will be in the morning hours and last until around 2:00 p.m. The address is 45 John Frank Ward Boulevard, McDonough, Georgia.

Come out and visit or pick up a personalized copy of all three books.
Posted by The Professor at 10:39 PM 4 comments: