Where is Button Gwinnett Buried?

Recently, in my Georgia History class at the college, we discussed the Revolutionary War in Georgia.  Customarily, it is difficult to discuss this epoch in Georgia without discussing the Georgia signers of the Declaration of Independence. The most notable, for various reasons, of those three signers from Georgia was Button Gwinnett. Most often, students in my college classes can remember him because of his name. How odd, they say, it is to be named Button.  However, another reason he surges to the top of the list is the way he died.  He was shot in a duel by Lachlan McIntosh near Savannah.

Because he died so young, Button Gwinnett did not sign too many things.  Of course, the most famous document to which his "John Hancock" is attached, is the Declaration of Independence.  Funny, huh???  Recently, a Yahoo News Story declared that a signed document was purchased by a collector.  The Gwinnett signature made it ten times more valuable.  It sold for almost 800,000 dollars.

Nevertheless, the namesake of Gwinnett County's odd life does not end there.  Oooops! I did it again.  Well, you will understand as I go on.  As many of you know, my friend Don Rhodes authored Mysteries and Legends Georgia: True Stories of the Unsolved and Unexplained.  In the book, he devotes an entire chapter to the saga of Button Gwinnett, but not his life nor his death.  What then?  Rhodes opens up the discussion on his remains, and, well, where they remain.  I am just full of this stuff, huh??   The story goes like this.

After Lachlan McIntosh and Button Gwinnett dueled, the latter was seriously injured.  Gwinnett lingered throughout the weekend, having been shot on a Friday, and finally capitulated on Monday morning.  According to accounts given by Rhodes in his book from notable historians with the Georgia Historical Society, reports in local papers at the time indicate that Gwinnett was to be buried in Christ Church Cemetery in Savannah; this is now called Colonial Park Cemetery and is a notable tourist attraction in the city, particularly on ghost tours and paranormal investigations.  In fact, there is a monument there that gives the cemetery spot where it stands as the location of his burial.

One would think the mystery would not have cropped up given this certainty over his burial. However, years later, a man living near Augusta in the 1840s stumbled upon the grave of Dr. Lyman Hall, another signer from Georgia. The idea was birthed to build a monument to the three signers and place it in downtown Augusta. Hall's body was unearthed, as was George Walton's in Rosney Cemetery in Augusta. However, as the progress on the monument continued, Gwinnett's body was not included.  In fact, only Walton and Hall are interred underneath it today. Gwinnett was not even mentioned as having been found in any of the reports at the time the monument was dedicated.  So why the mystery?  It was reported by Georgia newspapers that Gwinnett was buring in Colonial Park after he died.  Did someone attempt to unearth him there and not find him?  In 1956, an official Georgia Historical Marker was placed at the Signer's Monument built in Augusta in 1848, and it mentions that although Walton and Hall are buried underneath, Gwinnett's remains were never found.  Odd!! Even the Georgia Historical Marker located in Lawrenceville at the Gwinnett County Courthouse mentions that Gwinnett is buried in an unknown location?

Zell Miller, in his book Great Georgians even mentions that rumor has it Gwinnett is buried atop an Indian mound on St. Catherine's Island where his home was located.  Other rumors indicate that his bones were washed out to sea by a hurricane some years ago.  But why is there a monument still located in Colonial Park Cemetery indicating he is buried there??
So how did this mess get started in the first place?  Where is Button Gwinnett buried?  Why is there a monument over a plot in Colonial Park if he isn't there.  I can think of a way to find out.  But that would be illegal, and macabre, if I do say so myself.

Posted by The Professor at 4:18 PM No comments: 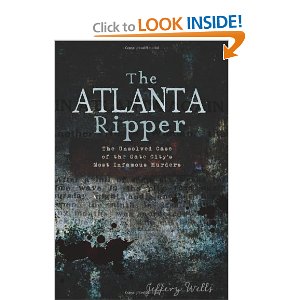 On Thursday, September 15th at 7:00 p.m. I will be giving a lecture on my recent book The Atlanta Ripper: The Unsolved Case of the Gate City's Most Infamous Murders at Manuel's Tavern at 602 North Highland Avenue in Atlanta.  Please come and join us if you like.  The signing and discussion is being sponsored by A Capella Books.
Posted by The Professor at 3:11 PM 1 comment: