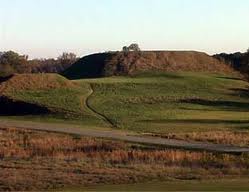 For quite some time, visitors to the Ocmulgee National Monument, better known as the Indian Mounds in Macon, have talked about the strange feelings they get there. In fact, the daughter of a friend mentioned that on top of the big mound she felt someone or something pull her hair. When she looked around, no one was standing near her.  Her sister and aunt were nowhere near her on the mound.
My young friend was not the first, nor will she be the last to hear strange sounds and feel presences that cannot be seen at the mounds. In fact, as early as the late 1700s, traders who passed through the area and camped near the mounds heard shrieks and cries in the night.  Many have reported hearing voices and seeing images that disappeared in to thin air.  Not long ago, the late Sam Lawson, a former ranger at the mounds and adjunct professor at Georgia Military College, was locking up the visitors center at the park.  While closing the doors, he heard the laugh of a child.  His first thought was that a child had been left inside.  A complete search of the building turned up nothing.  A fellow ranger helped him search, and she too found no one.  Later, Lawson recounted his story to the gift shop manager who said that she had also heard a child's laughter in the visitor's center, but that upon inspection, no child could be found.  The two felt that there might be something to the story.
Ranger Sylvia Flowers told the author of Ghosts of Macon that throughout the years, a legend has floated around about a white and black dog being seen on the property by visitors and staff.  Lawson also mentioned that he had heard the stories, and that some have even approached the white dog only to have it vanish before their very eyes.  At one time, a Samuel Dunlap lived near the mounds and he owned a white dog. Perhaps the spirit of this dog has been left behind?  There is also a Creek legend about a large black dog that is often times spotted at ceremonial sites like Ocmulgee, and that this dog is a spirit guard placed there to protect the sacred site.
On another occasion, visitors to the mounds reported seeing a man dressed in what they thought was a Confederate uniform.  Since the mounds were the site of fighting in Georgia during the war, particular The Battle of Dunlap Hill, some reenactments have been staged there. The group thought that this was just a docent awaiting a reenactment of sorts, and they thought nothing of it, that is, until they were told no one was there that day wearing a Confederate uniform and the staff was unaware that anyone would be.  Perhaps the spirit of a dead Confederate solider is also wandering around the mounds?
The Ocmulgee National Monument is a fascinating place.  I take my Georgia History classes from the college there at times. This past summer, my class from our Madison campus visited. Although we were there in the hot July sun, the students loved it. They commented that this trip was one they were glad they took, and some even commented that they were going to bring their children back as soon as they could.  Perhaps they will see the spirits that keep vigil at one of the oldest settlements in the Peach State!
Posted by The Professor at 9:26 PM