The Haunting of the Allman Brothers Home in Macon

According to a great little book my friend Rita and I found in Macon at the Goodwill Bookstore there (Goodbooks) last January right after the big ice storm here in Atlanta, the Allman Brothers home has quite the haunted history. The three-story Tudor style home was the residence of the Allman Brothers for three years in the city.  Before that, it was the home of former Georgia Governor Nathaniel Harris.
The book, Ghosts of Macon by Mary Lee Irby, highlights the fact that the new owners have experienced some major issues in the house since purchasing it some years ago.
Apparently, there is something strange about the stairs in the home, and Mary Lee Irby makes sure the image of the staircase is front and center in the chapter on the Allman Brothers Home in her book.  The new owners stated that the first weird experience they had in the house was on the staircase. It appears that the wife, Kirsten West, kept "...tripping and falling on the stairs."  She went on to state that "After one fall, I had to stay in bed for three months because my back went out.  I had a ruptured disk."  West mentions that she spoke with previous owners of the home and that the wife in that family also had the same issues on the staircase.  Quite strange, indeed.  From this, I gathered that there might have been some tragic happenings on the staircase when the original owners or the Allmans lived there.   I was not the first to have that impression.  West points out in her interview with the author that if you look closely at the staircase, there are a few spindles that do not match the others, as if they have been replaced because of some accident. Oddly enough, this is right where West repeatedly falls on those stairs.
On another occasion, the Wests were working with a film student from Atlanta who was doing a project on the Allman Brothers Band.  One morning, the student was making the bed in the room where she slept when she saw a door open by itself out on the landing as if someone were opening it and walking through it.  She also mentioned that some months prior to this, after visiting the Allman Home for a brief time, she returned to her home in Atlanta and was barraged with strange dreams of a woman running down the staircase of her own home while screaming.  It appears that something was sending a subliminal message to the film student.  Was there a connection here?  Why did she have those dreams at her home in Atlanta after visiting the Allman Home in Macon, only to come back months later to experience what seemed like some invisible presence opening a door on the landing and walking down the stairs?
Kirsten West also mentioned that her dogs seem to stare at something in the home that she cannot see.  We all know that dogs and children are supposed to have a sixth sense and be able to see things that the rest of us cannot see. Is this an example of such?
While all of these events are strange enough, they are not as off-putting as what happened to Kristen's dad when he came to visit his daughter and son-in-law.  Charles Olson, who has since passed away, related that while on his visit, he arose and dressed early one morning because he smelled what he thought were cinnamon rolls baking in the kitchen.  Who wouldn't be lured out of their slumber by that?  And, of course, it is quite logical to assume that his daughter would be cooking something like that for her dad in honor of his visit.  However, that was not the case. In fact, upon further investigation, he discovered that no one had even gone in the kitchen that morning before he arose.  There must be something about cinnamon rolls the ghosts in that house like, for not long afterwards, a reporter visited the home from the Chicago Sun Times and had the same experience.  But the cinnamon rolls were not the most disturbing of the father's experiences there.
One night, while sleeping in one of the guest bedrooms, Charles Olson, West's father, said he was awakened by something in his room.  He saw someone standing beside his bed.  It was a female.  A few nights afterwards, he was awakened again and this time, another female specter appeared to be lying above his bed.  He commented that "Her elbow was bent and her cheek was propped on her hand..  She had on some sort of bonnet and a long dress with ruffles that ran from the neck to her waistline.  He quickly jumped out of bed and looked at the image.  A few seconds later, it disappeared.  From this description, it appears that the apparition was from a time well before the Allman Brothers stint there in the early 1970s. 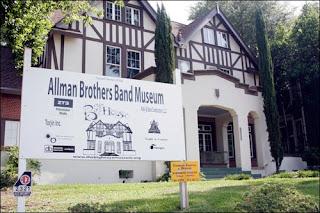 So is the Allman Home haunted? If so, by whom?  Are these ghosts from the era of Governor Nathaniel Harris?  What happened on that staircase?  Today, the home is a museum.  You can check out the website at www.thebighousemuseum.org.

Posted by The Professor at 9:19 AM