The Strange Disappearance of Justin Gaines

One of the highest profile disappearances in Georgia was that of Justin Gaines. Gaines, 18 years old and a freshman at what was then called Gainesville State College, now part of The University of North Georgia, decided to spend the evening with friends at a local nightclub and hangout known as Wild Bill's in Duluth, Georgia in Gwinnett County. That would be the last night anyone would see Justin Gaines. The date was November 2, 2007.

The Thursday night in question was a popular night at Wild Bill's-Thirsty Thursday, as they called it. Local police investigating the case said there were over 3000 people in attendance that night at the club. While there, surveillance cameras picked up Justin on their footage, but then he simply vanished. The last image where showed up was of him making a cell phone call to a friend to come and pick him up. After that, the cameras had no more images of the missing teenager. From what police understand, Justin phoned several friends, and none of them were able to come and pick him up from the club. So, Justin left the club around 1:30 AM.

There are several important things to note about Justin while he was at the club. Apparently, he took a lot of cash with him to Wild Bill's. Why is unclear. Additionally, he was wearing a diamond earring in his ear, something he routinely wore out and about. Detectives investigating the case theorized that this probably attracted the attention of the wrong kind of person, and that could have had something to do with his disappearance. The theory gained some traction with the emergence of a suspect named Dylan Glass, a convicted felon and gang member. Glass told police that he indeed did assault Justin and took the diamond earring from his ear, but he did not kill Justin. As of 2017, Glass was not charged with the anything related to the Gaines case, but Glass was in federal prison at the time of the confession serving a sentence for unrelated charges. One thing to note about Glass, however, is rumors have circulated about him telling a friend he killed Justin Gaines, and according to Justin's mother, Erika Wilson, Glass was saying this prior to her reporting Justin as missing. While such a claim is difficult to substantiate and Glass maintains he does not know the whereabouts of Justin nor did he kill the 18-year old boy, in 2011, another suspect, Martin Leonard Wilkie was arrested for concealing a death. The reason: Glass told authorities that he and Wilkie had in fact assaulted Gaines and shot him to death. It gets worse from there. Glass and Wilkie supposedly placed Justin's body in a toolbox and then took it to Walton County. Horribly, Glass' mother, Ruth Ballew, was potentially involved, as it was told that she helped the two men dispose of the body. She even led investigators to the location where they supposedly dumped Justin, but no body or evidence of remains were found there. Ultimately, she was charged with making false statements to police.

Police also strongly believe a blonde-haired lady lured Justin into her car for a ride home form the club. The next is just theory. They think the woman took Justin to a house in nearby Snellville where he was robbed and killed. They further theorize that the killers probably threw his body in Lake Lanier, and when it surfaced, they retrieved it and dumped it down a well, which some say was in nearby Barrow or Walton County. Police investigators have searched nearby wells for human remains, and nothing has been found. To this date, no one has seen him, heard from him, nor found further evidence of his whereabouts. Remains have been found near Lake Lanier, but so far, none of them have been identified as Justin Gaines.

So the question remains, what happened to the boy? Why did he not have a ride home from the club? Did he tell anyone at the club where he planned to go after the night was over? Who was this mysterious blonde woman who supposedly lured him into her car for a ride home? Did the money he flashed and his diamond ring draw attention from thieves and miscreants who then robbed and killed him? Did Dylan Glass really assault Justin and take his diamond earring but leave him alive, or does he know more than he is telling?  Did he and Wilkie shoot Justin and dump his body off in Walton County with the help of Ruth Ballew, Glass' mother? If not, why did they lie, and why did Ruth Ballew put herself in jeopardy by lying to police and taking them on a wild goose chase looking for a body that wasn't there or ever was? Or was it at one time?  Another pressing question is that Justin's parents told him that he could always call them for a ride home, no matter what time of night or morning it was, but he didn't. Why? Of course, the ultimate and most important questions are, what happened to Justin Gaines, and where are his remains? 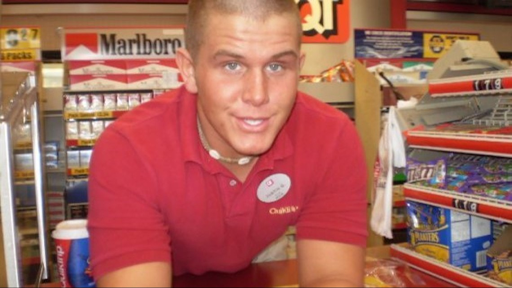 The above is a picture of Gaines at 18. Today, he would be 32 years old. He stood at 5'10-5'11 and weighed about 230 pounds at his disappearance. There is a reward for information leading to his remains or for information that could solve the case. His mother and investigators believe that Justin is dead, so this is a recovery rather than a rescue attempt.