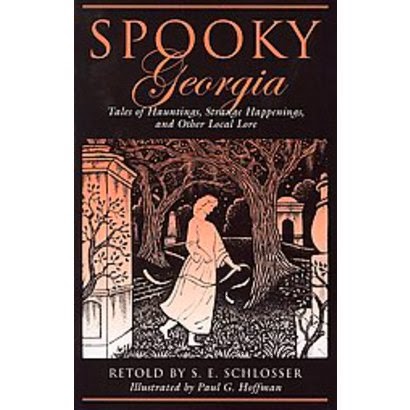 Spooky Georgia: Tales of Hauntings, Strange Happenings, and Other Local Lore by S.E. Schlosser is one of a series of books in the Spooky Series written by the same author with Globe Pequot Press as the publisher.  Schlosser is a researcher and frequent writer about American folklore.  Her series of books gives a decent account of interesting legends and tales of the supernatural in the various states she examines.  Potential readers should not be fooled by the title.  Not all of the tales recounted by Schlosser are spooky or hair raising in nature. In fact, there are a number of Native American legends included. The most interesting of the Native American tales told in the book is that of the Nunnehi.  According to legend, these are beings that inhabit Blood Mountain and are there to help those travelers on the mountain who have lost their way, are hurt, or feel frightened and confused.  Of course, there is much history and folklore already associated with Blood Mountain, as it is the location of one of the most intense battles between the Cherokee and Creek peoples of Georgia, the two leading historical tribes in the state's history.  The beings, often called "the immortals," are a part of Cherokee Indian legend, and have found a place among the many Native American tales associated with the tribe.
Schlosser, who also traveled part of the state in search of folklore and legend to include in her book, divides the text in to two parts, one solely dedicated to ghosts and hauntings, the other dedicated to good and evil presences in other forms.
One tale in particular that interested me was titled "On the Tracks," and is credited to the city of Lawrenceville, a city located in Gwinnett County in the Atlanta metro area.  As most of my readers know, I have published the only book on record about the legend of Sasquatch in Georgia, and that will most certainly explain why I was drawn to this tale.  As a matter of fact, as I pored over the table of contents in the book, I spotted that entry quite quickly, and I turned immediately to it and read it first. I won't spoil the story here, but I will definitely say it is one of the better ones in the book.  I must confess, I did not quite get to this account when writing Bigfoot in Georgia; however, Ms. Schlosser did, and she even read my book, as it was used as a source in her book.
I really enjoyed the book, especially since it was a Christmas gift from my dear mother, but there were a few things I feel the author missed.  One, she recounts the tale of "The Meanest Man in the South." This story is a very popular one in Georgia history and recounts the story of the Walker Family.  The tragedy centers on the death of the Walker son, Josiah.  However, the author, who makes sure she puts the name of the community from whence these legends arose on the opening page, credits this story with the city of Midgeville. As a native Georgian, having lived here all my life and written extensively about the state and its history, I would know if there was a place called Midgeville. To my knowledge, there is not.  In actuality, this legend stems from the antebellum capital of Georgia, Milledgeville.  Of course, this could easily be a typing error, but it appears over and over in the story. That weakens the book, in my opinion, as the city itself (Milledgeville) is not a city that lacks importance in the state and its history.
I really enjoyed the fact that many of the tales were told as they are related in legend.  This is specifically true in tales like "The Old House" from Cairo, and the aforementioned "On the Tracks."  I also admire that Schlosser traveled to places in Georgia, particularly Savannah and Atlanta, to personally research the state's folklore and legends.  Schlosser also seems to have immersed herself in the study of legend and lore for most of her life.  In addition to checking out this book, I would also encourage you to take a look at her website.  The link is below.
http://www.americanfolklore.net/index.html
Posted by The Professor at 1:57 AM