Camp Creek Train Crash Memorial Week; Books Signings, and A Play Based on My Book

This week marks the first ever celebration and memorial of the lives, heroes, and story of the 1900 Camp Creek Train Crash in McDonough, Georgia.  In 2009, The History Press offered me the opportunity to write about the train crash and published my book In Atlanta or in Hell: The Camp Creek Train Crash of 1900.  This week, here in the city, the City of McDonough, the McDonough Main Street Program, and former city councilwoman Sandra Vincent are spearheading a week-long series of events to commemorate this part of our local history and to honor those heroes of the crash.  Here is the list of events, some of which have already taken place:
*Opening Reception and Book Signing at Bell, Book and Candle-Saturday, June 16th
*Performance of Old No.7-a play based on my book In Atlanta or in Hell...Tuesday, June 19th
*Quinlan's Run-A 2 mile walk/run that follows the same route J.J. Quinlan ran on that fateful night to get help and waive off oncoming trains-Saturday, June 23rd at 7:00 a.m.
*Model Train Museum -The Middle Georgia Model Train club will have their display in the Chafin Bldg. in downtown McDonough from 9-5 with a replica of the engine that crashed on display all day-Sat. June 23rd
*Book signing for In Atlanta or in Hell: The Camp Creek Train Crash of 1900 at the Chafin Bldg. at 11:00 a.m. and 2:00 p.m.  Local Civil War Historian Mark Pollard and I will speak about the crash and local history
*Candlelight and Memorial Service at Alexander Park to honor those lost in the crash-Saturday, June 23rd at 8:00 p.m.

I am very proud of the City of McDonough for taking the initiative on these things.  The memorial service and events are long overdue.  As some of you know, the dead from this wreck were brought back to McDonough for burial preparation and transport.  Because there were so many of them, their bodies were laid out on the square until the two funeral homes here in town could get to them. Many say this is what has contributed to the many paranormal activities in the downtown square.


The Dutchtown High School Theater Department wrote and performed a musical based on my book, In Atlanta or in Hell: The Camp Creek Train Crash of 1900. The presentation of the play was at the Henry County Performing Arts Center Tuesday evening. I was amazed at their talent and hard work. It was a humbling experience seeing a play based on my work.  I met many of the cast afterwards and was able to sign personalized copies of the book for them. Here are some photos from the event taken by Erica Barnham of Bell,Book and Candle, the independent bookstore in McDonough who sponsored the book signing. 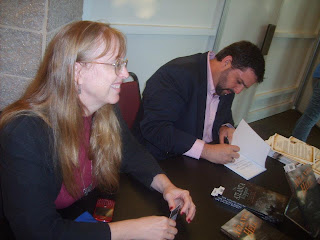 Caprice Walker of Bell, Book and Candle and I at the book signing 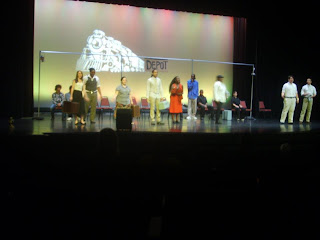 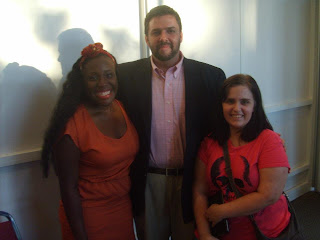 I am looking forward to the walk/run on Saturday. Yes, I will be out there huffing along with the rest of the crowd.  I have been walking two miles several times a week here lately, so I should be able to hold up okay.  I am also looking forward to the model train museum and memorial service later this week. If you have not read about the crash and its impact on the area, check out my book or go online and do a bit of research. This happened on June 23, 1900.  It was the worst train crash in Georgia history, and of the 39 victims, quite a few were railroad employees headed home to Atlanta to see their families.  You can also check out my blog post from a few years ago about how this event has inspired quite a few legends about hauntings and paranormal activity on the square.
Posted by The Professor at 6:41 AM