The Winecoff Hotel-The Titanic of Buildings? Site of Hauntings or Popular Folklore?

In Atlanta, there are quite a few nice hotels. Perhaps the most well-known of these is the Westin Peachtree Plaza Hotel. Visitors to the Gate City can see it in the skyline well before they reach its front entrance. It is the cylindrical, tall one that used to dominate the downtown skyline until the Bank of America, Georgia-Pacific and Suntrust Bank buildings were built.  I remember as a child in the early 1980s traveling to Atlanta with family and being awestruck by how beautiful this building was-still is, as a matter of fact.  At one point, this was the tallest hotel in the United States.

While this hotel has captivated the modern imagination with its recent architectural achievements with glass, steel and concrete, there is another hotel in Atlanta history that won fame, although for a very different reason-the Winecoff.  Built in 1913, the hotel is now the modern Ellis Hotel.  Reading about this hotel's history, I wonder if this place should not be called The Titanic of Hotels, or buildings for that matter.  Built just a year after the sinking of the ill-fated ship, the Winecoff was built without fire doors, fire sprinklers, or alarms, the designers thinking that the building was fireproof, much like the designers of the Titanic thought it was unsinkable. This does not surprise me, as 1913 is smack in the middle of the Industrial Age-a time where some American industrialists felt that they could overcome nature and many felt that man-made creations of the industrial and technological age could make us superior to our environment.  This delusion of grandeur was not limited to the United States. One need only reference the Crystal Palace in London's Hyde Park in the 1850s.  While it took virtually no time to disprove this theory in reference to the Titanic, as the ship sank on its maiden voyage, it was a few decades before man's faulty logic would become evident at the Winecoff. What is surprising to me is that after all the tragedies like the 1911 fire at the Triangle Shirtwaist Factory in New York, the buidlings designers would think that a building this tall could be immune from fires, and that over time the absence of fire prevention and escape was not corrected. 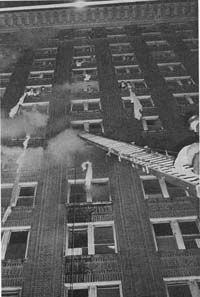 photo courtesy of http://www.winecoffhotelfire.com/
As if there was not enough historical irony at play here, the hotel actually caught fire on December 7, 1946, the fifth anniversary of the bombing of Pearl Harbor.  To add insult to injury, the hotel was filled to capacity-280 guests.  Among them were World War II soldiers who were home from the war ready to start over and rebuild their lives.  Also present were high school students who had come to Atlanta to attend a mock session of the legislature.  How tragic.

Sometime around 3:00 a.m., an elevator operator smelled smoke and alarmed the hotel guests. Unfortunately, the hotel was so tall, and the firefighters had ladders that would only reach the eight floor.  Because the building was built in a square with the stairwell and elevator running up the middle, and the fact that many doors had been left open at each floor entrance, the smoke and fire were pulled up the middle as if the hotel itself were a huge chimney.  Not being able to go down this thoroughfare, many guests were forced to jump from their windows. Unfortunately, the nets available to the fire department would only catch someone who jumped from a height of 70 feet or below.  Before the night was over 119 people lay dead, with the bodies being taken to the alley behind the hotel and on the sidewalk nearby.  News of the fire and its tragic claim on 119 souls traveled quickly throughout the nation, and as a result, many states and cities enacted fire codes to prevent anything like this from happening again.

As with any tragedy, horror stories abound.  From these, ghost stories sometimes stem.  The Winecoff tragedy is no exception. According to paranormalists, negative energy is left behind in a tragedy of this proportion, and as a result, some souls are left to wander the area.  Ghosts have been seen at battlefields like Gettysburg, sites of car wrecks, places where murders have taken place, and sites of shootings and executions. Prisons, hospitals, and mental wards are the subjects of hauntings.  The Winecoff certainly provides this kind of kindling for the fires of ghost tales.

One of the most popular books that chronicles the said hauntings at the Ellis Hotel, modern site of the Winecoff, is Reese Christian's Ghosts of Atlanta.  I have met Reese Christian on a number of occasions; as a matter of fact, we did a joint book signing with Rhetta Akamatsu in Decatur at Eagle Eye Bookstore in October of 2009. I was signing copies of my book In Atlanta or in Hell: The Camp Creek Train Crash of 1900 and she with the above book.  Ghosts of Atlanta has already made it in to its second printing, so it must be pretty popular. I own a copy, and I found it very interesting reading.  In her book, she mentions the many strange occurences that many have reported to have seen while staying at either the Winecoff or Ellis.  Among them are the workmen who report their tools go missing or get moved when noone is around.  Others tell of stories about sounds of chaos and running in the hallways of the hotel, and strange smells of smoke.  Other stories recount images cast on windows of ghostly faces and shadows cast when noone is there.  Reese truly believes that the great loss of life at the Winecoff has inspired hauntings.

Not everyone thinks so. Famed skeptic Joe Nickells says that the occurences can be explained. At his website http://www.centerforinquiry.net/, he writes:
"Such reports may be unexplained, but they are hardly unexplainable. Workmen may mislay tools, or fellow workers may play pranks on them; guests can hear noises from other floors; and smoke may be imagined or simply come from someone's cigarette. Some ghostly experiences in hotels—including vivid apparitions—may stem from a guest's "waking dream," a state that occurs in the interface between wakefulness and sleep. (See my "Haunted Inns," Skeptical Inquirer , September/October 2000.)
At the Ellis, as at many other allegedly haunted buildings, people outside sometimes imagine they can see ghostly faces in the windows (William N. Bender, Haunted Atlanta and Beyond , 2008, 131-134). When these are not actual faces—of guests or housekeepers—they may be nothing more than simulacra: These are the result of one's ability to perceive images in random patterns (such as the play of light and shadow upon a window), like seeing pictures in clouds. I did some experimenting with my camera at the hotel and produced the "faces" shown in one window here.
The manager of the Ellis, Peter Minervini, very kindly took a few minutes to sit and talk with CFI Libraries director Timothy Binga and me when we lunched at the hotel on September 4, 2010. He said he had worked there about a year and had no ghost experiences. The only thing he mentioned was an odd odor, occasionally perceived in one room, that he did not attribute to anything otherworldly. He said he was himself a skeptic regarding ghosts. The year before, I was startled when a young woman with a tour company told me there were so few credible ghost accounts in Atlanta that they were changing the name of their "Ghosts and Legends Tour." Will wonders never cease!"

There is a book about the Winecoff fire. You can visit the companion website at http://www.winecoff.org/.  The book, The Winecoff Fire: The Untold Story of America's Deadliest Hotel Fire, published by Longstreet Press, is an excellent source on the history and happenings associated with this dark moment in Atlanta history.

So is the hotel haunted?  Who knows?  One thing is for certain.  The Winecoff is certainly no exception to the "tragedy spawns ghost stories" rule.

Posted by The Professor at 3:47 PM