The Haunted Pillar in Augusta

One of the best pieces of folklore in the state comes from the city of Augusta. For those that don't know, Augusta is often called Georgia's "Second City" for various reasons. It was the second city founded in Georgia, and it was the second capital of Georgia.  It is one of the state's largest cities; I believe, in fact, it is the second-largest city in the state by population behind Atlanta. So, its reputation as the "Second City" is well-earned.
The folklore of which I speak focuses on a pillar that currently stands at the corners of Fifth and Broad Street near downtown.  That is not the original location of the pillar.  It once stood in the old Market Square area.  While there are many stories about how the pillar was built and who subsequently laid the famous "curse" upon it, most of the sources I have read seem to indicate that the most credible one deals with an evangelist who visited the city in 1829.  He preached in the Market Square district and demanded that the town build him a church from where he could preach the "gospel."  Unfortunately for the preacher, the town did not have the kind of faith in him and his ministry that he thought they should have, and he was mocked by the local residents.  Further stoking the flames, a local magistrate came and told him he was forbidden from preaching there any longer.  It was said that the "man of the cloth" was so angered by these events that he cursed all those within hearing distance of him and said that soon a great wind would come through and rip apart the town, undoubtedly the judgement of the Almighty.  No one knew what became of the preacher, but almost fifty years later, a twister did indeed strike Augusta and did great damage to the Market Square on February 8, 1878.  The hand of the Lord at the behest of the evangelist's curse-perhaps!!!
Shortly afterwards, a local merchant by the name of Theodore Eye purchased the pillar and had it moved to its current location. While nothing out of the ordinary happened to Mr. Eye, events that came afterwards were a bit unnerving.  It is said that there have been a number of automobile accidents involving the pillar, and that more than a few times has lightening struck the concrete structure.  You know what they say?  Lightening never strikes twice in the same place.  That is obviously not true for Augusta's haunted pillar.
A local story is also told about a cotton truck that struck the pillar in the 1950s. The truck almost demolished the pillar, and when a local resident claimed a piece of the pillar's remains as a keepsake, he fell ill and did not recover until he took the piece back.  Others have photographed the pillar (it was rebuilt after the cotton truck accident) and they claim to see orbs and what can be described as illustrations of energy surrounding the pillar. Others claim that they hear footsteps walking to and from the stone mass.  This is said to be the famed preacher who cursed the pillar returning to it to see who might be standing near the object of his curse.
According to Scott A. Johnson in The Stately Ghosts of Augusta, the pillar has been moved four times, and three other times, it has been almost completely demolished. Those responsible for its moving and its near destruction were unharmed and to his knowledge, still are or lived out their days normally.  Much lore has grown from this famous pillar. Stories told in Augusta include the deaths of those associated with damage or desire to damage the pillar. None of those stories hold any truth. This pillar is indeed legendary. It is a local landmark, and I hope it remains such, if for nothing else than to serve as a reminder of how local legend and folklore can be deeply rooted in a community's history. 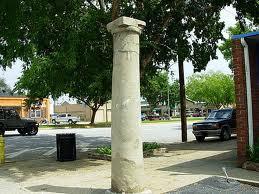 The above photo is courtesy of www.waymarking.com.
Posted by The Professor at 11:48 PM

Very interesting! I wonder if anyone has tried using a tape recorder at the pillar? It would be too eerie if the preacher's voice can still be heard trying to save those poor Augusta souls!