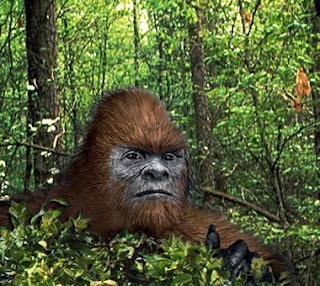 Fulton County, Georgia's most populous county, and the home of Atlanta. With almost 1 million people in Fulton County, it would be the last place that anyone would search for a bigfoot, and for the most part, it is more than plausible to think that there would not be much sasquatch activity in the county today. However, in 1961, one of the most interesting reports of bigfoot activity came from Fulton County, which, at that time, still had a great deal of rural areas, especially in the southern portion of the county.

Matt Pruitt, a bigfoot researcher, investigator for the BFRO, and a good friend of mine, handled this report. The events in question happened in 1961, but the report was not made to the BFRO until 2003. The delay can certainly be explained by the fact that the internet had a great deal to do with the ease of reporting bigfoot sightings anonymously. Most people shy away from talking about their experiences via newspaper, radio and television for fear of ridicule. While the internet has also done its fair share of making hoaxes easier, it has also made people who have seen and heard things more inclined to use it as a venue for discussion. Such may be the case with the person who reported this event to Matt.

It appears that in 1961, a family lived in a house with a basement in south Fulton County near the Campbellton Road. That year during the fall, the children of the family were playing in the yard of the house where they lived with their mother and grandparents. They had moved in with them after the death of their father. This is when they came in to contact with what they thought was a gorilla. The animal was underneath the house inside the unfinished basement. The children were frightened of it, and they decided to throw rocks at it. This illicited no real response from the animal, only a smile. The children retreated from the area and sought the safety of their mother. They returned to the spot later only to find the animal gone.

The report goes on to say that the family, through the coming years, would find very large footprints nearby, and more frightening, they would experience something looking in the windows of the home. Whatever it was had red glowing eyes. (There are a number of bigfoot reports where the animal was reported to be looking through the windows and doors of homes and other buildings. This is not uncommon behavior for these animals at all. Red eyes are also common in these reports. Researchers tell us that some of these animals do have red glowing eyes in the darkness.) In addition, family members would find apple cores near the tracks. It was apparent that the animal ate apples and would leave the core behind. It more than likely got them from the apple tree growing behind the family home. (Gees, it could have at least taken off its trash if it was going to steal apples from the family tree.)

As Matt investigated this report further by talking to the man who experienced this as a child, he found more details. Apparently, the children got close enough to the animal to notice how human-like its face was. Also, it did not seem threatening, for when the children drew near, it appeared to smile at them. The fur covered the creature making it appear gorilla-like.

Upon further inspection, Matt found that family members indeed saw these animals numerous times through the years. One incident involved one of these animals stealing eggs from the family's chicken coop. Others included them stealing and eating apples directly from the family's apple tree, and loud shrieks and screams coming from the woods nearby. These animals were seen peering in to the family's windows from time to time. The neighbors were well aware of their presence, and it was thought that a family of them lived in the area.

Fulton County, even in the southern portion, is very much different today than it was in 1961. There are still some rural parts, especially around Palmetto, Union City, and Fairburn. However, those small towns are growing and the urban sprawl is cropping up everywhere there too. I doubt this family group of sasquatches is still there. Naturally, they would have died out after 48 years, but their offsprings would perpetuate the group. However, I am willing to bet that as human encroachment on their living and hunting grounds has happened, what remained of them moved on. This could explain so many sightings in Fayette, Paulding, Coweta, and Douglas Counties. Perhaps there has been movement. The urban sprawl of Atlanta would have moved southward in to the lower portion of Fulton County, so perhaps this family group spread out and moved on, thus moving in to other nearby wooded areas, which could be in some of those other counties. Maybe, just maybe, this might account for the increased sightings over the last 30 years in those areas. This is just a hunch. Noone knows for sure. However, in my book Bigfoot in Georgia, I deal with the possible displacement of these animals in the last chapter. I discuss movement, how human and urban sprawl might be affecting these animals, and what possible ramifactions may come about as a result of this.

A family of Fulton County Sasquatches!!! Who would have thought. Better be careful out there my hairy friends. Some of those fast-talking Fulton politicians might come round trying to register you to vote!!!!
Posted by The Professor at 9:45 PM

Have you ever had a person say they saw a bigfoot type creature in DeKalb County? This would have been about the same time period.

Not that I can recall.

I have read that report and funny thing is, I was thinking about it last night. If it was a true occurrence, it is rather heart warming that while cornered, seems to understand and tolerate children.

Go to the Clayton County reports on BFRO and read the report in Riverdale. "That's why your father didn't want you in the woods". Quite interesting.

Yeah, that Clayton County report is weird. I used it in my book, which came in last night. As I was sitting there reading the book, I got chills. I got those same chills as I was researching the book and typing it out. There are quite a few stories in my book about sightings in Fulton, Fayette, Clayton, Paulding, and Coweta Counties.

Back in 1964 we lived in the southern part of DeKalb County between the Snapfinger Creek and the South River. Most of that area at that time was wilderness. There were still a lot of farms out there at that time. One day in the late Springtime I happened to see something looking in our living room window at me. It was only there shortly as I screamed and ran. But I do remember that the creature was covered with hair like an ape. My dad found it's tracks outside that were large and had a great stride to them. We never had anymore encounters with this creature. There were several people in the area that saw it that day and it was moving toward the South River. It is one of those things from your youth that sticks in your mind.

I have an interest because my Great Grandmother started it with the stories that you likely used in your book, (Buggy jumper). Then I saw something in the woods of Coweta county on Christmas day of I think 1994 or so.

I am struck by the Coweta Power line cut sighting by the hunter as well. I have been examining the theory I have of the Ga bigfoot using power line cuts as travel ways. Swamps always seem to figure in, there was one (larger than the existing) on Peters road, much of Christian city is in it now after being drain. Peters was deeply wooded when I was a child until old Charcoal (as they called him was let the land and stripped the living daylights out of it.

I hope the book will have other Fayette sightings because you mentioned many along Peters road.

There are quite a few sightings of these animals along power line breaks. A friend of mine, who did not want me to use her name because of the position she holds at the Univ. of Georgia, was riding with a friend through a more rural part of Clarke County this past March, and she saw what she thinks was a bigfoot walking across a power line break, and she said it got across very quickly, and it was covered with black from head to toe. Black what? She did not know. But it was warm out, and she did not think it was clothing. She was too far away to tell. But she did see that it had long arms that fell below the knees, and it was very tall.

As far as migration, I, like Matt Pruitt, do not feel that they migrate, and I cover that in the first chapter of my book. They do use rivers and creeks to travel around foraging for food, however. Do take a look at my book, especially the chapter entitled "What is Bigfoot?"

Doctor, can you email me more information on your sighting? Specific address, more details? Email it to the email address you use for me alot.
Thanks.

Will do my friend.

I spent a short time working with Hawk Spearman in the late 90s. We had a woman contact us about long time sightings in Fairburn believe it or not. I spent an exciting night out in the woods behind her house and heard movement all around us. She gave me some reddish hair, but Dr. Fahrenbach said were black bear. She had a weird cast too. Interesting case. She lived close to major power lines and theorized that they traveled along them when they moved. She also gave me a video that I transferred to DVD that has hours of her footage in those woods and there are a couple of interesting images that look like a face. Was bigfoot there? Maybe. :-D Can't wait to read the new book!

my family saw a creature very similiar to this in 2002 near shannon, ga. it was about 7 ft tall, weighed around 250-300 lbs. it seemed annoyed that we came upon it in our car. could this have been a female?