The Devil's Turnaround: Is There a Malevolent Spirit in This Marietta Graveyard? 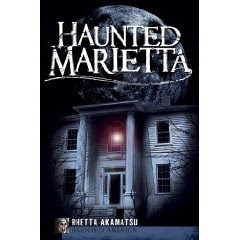 History Press has a series of books called Haunted America. One of the books in that series is called Haunted Marietta by Rhetta Akamatsu. On October 30th, in Decatur, I had the privilege of meeting Rhetta at a joint book signing we did at Eagle Eye Book Shop. Reece Christian, author of Ghosts of Atlanta, was also there signing books.

One of the stories she recounts in her book is about a cemetery in Marietta called the Devil's Turnaround. The cemetery, according to Akamatsu, is associated with an African-American church in the area that was founded in the 1800s. There are old graves in this graveyard, some dating back to the 1860s. Apparently, burials are still taking place there, as there are also some plots as recent as 2006. The reason the graveyard is called the Devil's Turnaround is due to strange activity that happens there, as well as the fact that the older graves are aligned in a semicircle for some reason.

Akamatsu says that there is a lot of activity in this cemetery of the human kind, as well as the supernatural. Apparently, there is a good bit of vandalism, but there also appears to be cult activity there as well. She and her team have visited the cemetery and seen holes where bodies had been dug up. She has also found snakes with their heads cut off, and there have also been reports of dead dogs being buried in shallow graves there. Perhaps this is what has contributed to what Akamatsu says is a malevolent spirit present in the cemetery.

Paranormal research groups have gone to the graveyard and investigated. On a recording, one researcher picked up a voice (possible EVP) that said, "I think I'll kick you." Other weird happenings include large objects being picked up and hurled through the air by some unseen force. Some visitors and researchers at the cemetery have reported being bitten, scratched, and bruised without knowing how these things happened to them. Investigations at this graveyard have been featured on such television shows as TruTV's Haunting Evidence. Patrick Burns of the Atlanta Ghost Hounds, once visited the cemtery and when he returned home that night, he discovered a deep scratch on his arm as he disrobed for bed. He was unsure as to how the mark got there, and did not remember feeling anything at all in the cemetery, especially anything that could have left a mark as deep as it was. Other visitors to the graveyard have reported things being thrown at them, bite marks on their arms, and being lifted off the ground by unseen hands.

So what is it that seems to taunt visitors to the Devil's Turnaround in Marietta? Could it be that vandals, cult rituals, and other nonsense have roused an evil presence that was there? Or is it the spirit of some soul buried on the grounds who does not like his/her resting place being the scene of such activity? Urban legends about this place abound. What can be certain is that something strange is going on at the Devil's Turnaround.
Posted by The Professor at 8:46 PM

I really appreciate your posting and glad you found the Devil's Turnaround article intriguing. I want to emphasize that the grounds are posted and encourage everyone never to go there at night. I deliberately did not say where it was because I don't want to encourage anyone to visit irresponsibly.

It was a joy to meet you and I hope we get to do more signings together!

It does sound like something evil may have been brought out at this graveyard. My mom would call a place such as this a Satan's chamber because of the physical activity there.

There are ways to find out where it is on the Net unfortunately. I have never been and from what I gathered on the Net it was allegedly a Vortex area. Not really familiar in what that entails, except glad its not happening in my side of Cobb County, lol.

I've actually been to Devil's turn around with two of my friends and it is a highly active area. We weren't there more than five minutes before we experienced some activity. My friend Julia asked a few questions and shortly after that we hear something Foyt rough the trees over our head and en a loud thud. Needless to say we left.

Hi. I was wondering if you know any more about this area. I found out about this cemetery recently, and it spooked me a bit. I grew up on w. c., and this place was practically in our backyard. Before it was converted to a neighborhood, there was an old farmhouse, pre-civil war from what my parents said. The thing is, it was also haunted. My family has a few stories about it, but the presence was perceived of as good, like a guardian.
I guess I just wanted to ask if anyone has done historical research into this specific area, and if so, the name of any books you would suggest.

I rode by and took a few pics where the entrance used to be. I did not go on the property. One of the pictures was very spooky.

I went to the devil's turnaround and absolutely nothing happened

Here again, we have a situation where people believe so deeply in their minds that something paranormal is going on in this cemetery that to them there is activity when they go there. It is very real to those people because they convince themselves in their own mind that this so called phenomenon is truly real. It is only real to them because they have convinced themselves it's real. This kind of so called paranormal is only real to those who convince themselves it's real. A cemetary is a place of peace and rest, not a place where peoples imaginations run wild.